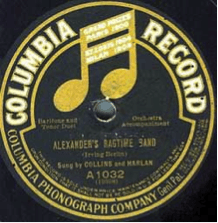 Columbia Records in the US had two parts. A manufacturing company called American Graphophone Company (later it became the Columbia Graphophone Manufacturing Company in 1916). A graphophone is a device used to play cylinders.

The other part of Columbia was a sales component called Columbia Phonograph Company.

Columbia started producing musical cylinders but seriously entered the disc market in Oct. 1901 to sell a 10in. label called Climax. In Sept. 1902 the Climax label was discontinued in favor of a Columbia Disc Record brand.

In the pre-WW1 years, Columbia would introduce a musical note design. Either in a dark blue or black and always with Gold lettering with the large “Note” at the top. This design would last from 1911-to 1915.

In 1915 Columbia would introduce a new design called the “Gold Band.” This design was sometimes seen in black but would always include the “note” logo at the top, this time encircled. This label lasted from 1915-to 1923.

The next label change would be more patriotic. Often called the “Flag Design” label it includes two colorful flags on opposite sides of the label. The color of the label may be blue, brown, green, or yellowish depending on the genre. It would last from Dec. 1923 to June 1927.

It was during this period of time (the mid-1920s) that Columbia would be bought by its English equivalent, The Columbia Graphophone Company (in 1925), and buy Okeh records in 1926. In Jan. 1927, Columbia added the statement  “Electrical Process” and “Viva-Tonal” on the label (seen on the left). The color of this label is either black or red always with gold lettering. The electrical process statement is dropped when bought by CBS in 1938. Note the encircled “note” logo at the top.

Columbia would eventually be bought by the American Record Corporation (ARC) in early 1934. ARC did not do much with the label and sold Columbia to Columbia Broadcasting Service (CBS) in 1938.

During World War Two: In Sept. 1939, CBS would introduce the red-labeled “Note and Mic” Columbia label. CBS would revive Okeh as a budget brand and discount Brunswick and Vocalion labels. The “Note and Mic” icon would be replaced by the Walking-Eye sometime in the late 1950s (most likely 1958 though some sources say 1954).

Post-World-War Two: In, 1948 the CBS-owned Columbia label introduces the Long Play (LP). CBS would produce 78s under the Columbia label until 1958 when Columbia drops 78s in favor of LPs. Columbia would also produce 45s and change the logo to a “Walking Eye”. CBS would eventually sell Columbia to Sony in 1988.

NOTES:
A. Columbia would go on and manufacture custom labels for different department stores such as Sears (Harvard Label from 1905-1907 which was replaced by Oxford Label), Montgomery Ward, and other customers.
B. Columbia would have several budget labels including Clarion, Harmony, and Velvet Tone.