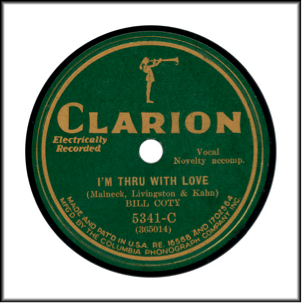 Clarion Records was a budget label for Columbia records. Clarion was introduced in Aug. 1930 and was discontinued in June 1932 after only 477 releases. It appears the label started from 5000 and ended with 5477. The label focused mainly on children’s and novelty records. It sold for 35 cents.

Some Clarions are experimental “Longer Playing Disc” with thinner grooves to accompany a longer track (4:30-5:00 minutes). A special note about Clarion was the fact that two other different labels also called Clarion did exist. Below is the label for Columbia.

One popular Artist that was found on Clarion was Kate Smith.

Below are two selections of hers both recorded on Clarion:

Another well known musician Duke Ellington and his Orchestra went by the Pseudonym Mills Ten Blackberries. They released several recordings with the same record number. Note: Due to the difficulty of finding Clarion recordings I have substituted labels.
Black and Tan Fantasy -Clarion-5331. Recorded on 6/12/1930