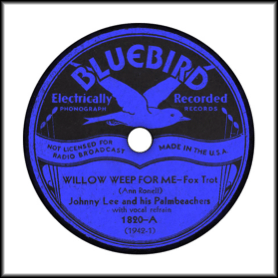 Bluebird records were part of the RCA-Victor Corporation. It was created as a budget label by RCA-Victor in 1932 in order to enter the discount-record market. Original Bluebirds were 8 inches but were dropped by March of 1933 in favor of 10in. records.

Pre-1941 Label:
You will note in the Bluebird series, that they say electrically recorded. “Electrically Recorded” came about in the mid-1920s using microphones to capture sound rather than simply playing into a horn.

By Sept. 1933 the label changed to a blue and cream cover. This is sometimes referred to as Bluebird “Buff” by collectors.

By Sept. 1937 the record label had changed to dark blue and gold coloring. The Bluebird bird logo was now shown against a musical stave.

1941-1945 Label:
Shows the RCA Dog and Bluebird bird logos together. However, in Nov. 1942 Bluebird added the “30” prefixes to its labeling. The color is still dark blue and gold.

Post-World War II Label:
By the late 1940s, the Bluebird logo is dropped completely. The RCA Dog logo is instead displayed prominently. Bluebird records become indistinguishable from standard RCA records except for the dark blue and gold coloring and a small notation of “Bluebird Series.” at the top.

In addition, there was also a series of Children’s records. These were issued with serial numbers ranging from 1 to 1000 with prefixes “BK” and “BY” from May 1936 to the early 1950s.