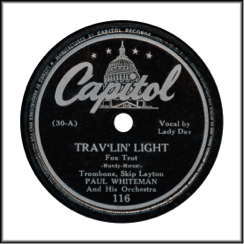 The color is purple or maybe red. The word “Americana” maybe listed below scripted the Capitol. Also, purple background with or without rimmed-border. Unrimmed Capitol records have a smaller scripted Capitol.

The Scranton, PA Pressing Plant.
This processing plant produced records between 1946-and 1973. It had a special stamp which is supposed to look like the Capitol Building or a Keystone (as in Pennsylvania’s nickname of the “Keystone State”). The stamp sometimes included the letters IAM inside of it. IAM stood for International Association of Machinists.

The Jacksonville, FL Pressing Plant
This plant pressed records starting in 1965 under Capitol Records and stopped pressing records under the EMI brand in 2004. The plant stamp looks like an O or an 0.

The Los Angeles, CA Pressing Plant
This plant pressed records between 1947-and 1982. The special stamp looks like an asterisk, a 5 or 6 pointed icon, or a crude star, as in Hollywood.

The Winchester, VA Processing Plant:
This plant produced records between 1969 to the late 1980s. The special stamp looks like a crude rifle or a horn:

The First 9 Records are (Courtesy of Wikipedia)