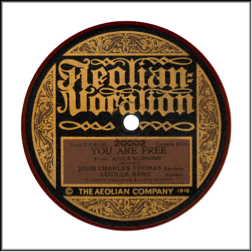 The Aeolian-Vocalion was created by the Aeolian Piano Company in 1916. The Piano company produced, besides pianos, phonographs. Having a record label was the natural extension. In Aug. 1920 Aeolian introduced reddish-orange pressings. In 1921 the title label “Aeolian-Vocalion” was replaced by just the “Vocalion” title label in a black and gold color scheme. Acquired by Brunswick Records in 1925, Brunswick would keep the black and gold color scheme and add the phrase “Brunswick Record Corporation” at the bottom. American Record Company (ARC) would acquire leasing rights to Brunswick Records (including Vocalion) in late 1935 and create a glossy black design. It would stay that way until 1937 when the label turned a bright blue. The bright blue label would last until 1940 until Vocalion was acquired by Columbia Broadcasting System (CBS) and discontinued. The Vocalion catalog was then re-leased under the CBS name. Delta Blues singer Robert Johnson first recorded on the Vocalion label in 1936-1937.

Aeolian-Vocalion Record Label: 1916-1920. This record is pressed in black. Tiger Rag by the Original Dixieland Jass Band was first released on the label.

“The Profiteering Blues” was written by Irving Bibo and sung by Bill Murray. Bill Murray was an early 20th-century singer and entertainer.