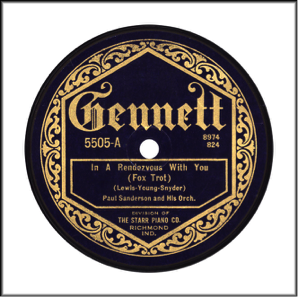 The Gennett label created by Starr Piano Company. The first records produced were under the Starr (1916-1917) label. The Starr label was replaced by the Gennett label. Early Gennett labels were plain but between 1920-1927 they would feature a hexagon. In 1927 Gennett would add the phrase “Electobeam” to its label pressings. Starr Piano would cease selling the Gennett label commercially in 1930 (Gennett would live on till 1934 as a custom label) and concentrate on its budget brands: Champion, Superior, Buddy, and Supertone (pressed for Sears).

Superior (#2500-2839) was produced between 1930-1932. Gennett would often press records for other labels/companies. Appears to be mostly re-issues. Label design unknown.

An example of Gene Autry, T.B. Blues, on Gennett: