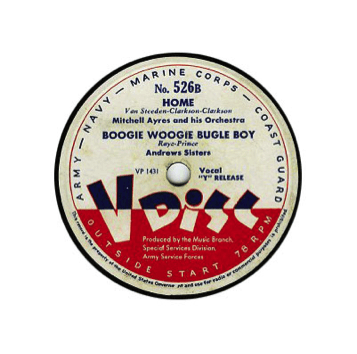 Victory Discs or V-Discs
Introduction:
V-Discs are a 12in., double-sided, 78 Records that contained popular songs of the day. They were distributed for free/played to soldiers serving in World War II. The sides of the record were labeled as an A-side and a B-side. Each side contained one song that was about 6 minutes. The extra two inches (as compared to 10in. for a regular 78) allow for more grooves to be cut in the record, thus increasing playing time.

The V-disc program was started as part of the Army’s Recreation and Welfare Section in 1941. Though it did not get traction until a musician strike in 1943. Designed as a morale booster for soldiers, the discs were to be played and not sold as per agreements between the artists, the American Federation of Musicians, and the Army. The program ended in May 1949 and all copies (including the master copies) were destroyed. The V-Discs were destroyed because at the time of the agreement (in 1943) the American Federation of Musicians was on strike and was not producing music for commercial purposes. The program was mutually beneficial for all involved: The musicians got to experiment with new styles and sounds without backlash, the soldiers got to listen to their favorite musicians, and the American Federation of Musicians received the patriotic benefits of supporting their country while continuing their strike. Though, some discs did escape the purge.

Click on below to listen to the Andrew Sister’s Boogie Woogie Bugle Boy of Company B made on 10/1945 for V-Disc #526-Side B:

Now listen to the exact same song below when it was commercially released by Decca in 1941. See if you can spot the differences between the two songs.

Notes: The Tommy Dorsey and Jimmy Dorsey bands made a rare recording together for a V-Disc. Fats Waller’s last recording was on a V-Disc.