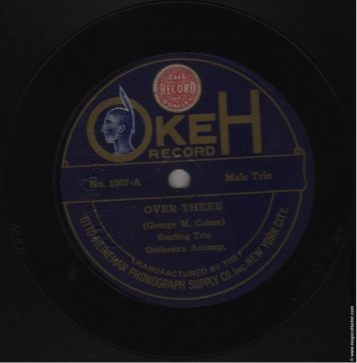 Pre-1941 Label:
Indian Head as logo either in a Red or Blue colored label with black shellac.

Okeh also produced records in red color. In this example (below), Irving Berlin composed the song You’d Be Surprised in 1919. Billy Murray (the singer not the actor) made his own rendition of the song sometime in the early 1920s.

The Okeh record (below) is rather interesting. You will note the scripted lettering which was a design change most likely in the early 1920s while Okeh Records still belonged to GPC. However, the term “Electric” was added to many records beginning in 1925-1926 as the technology to produce records changed from simply playing into a large horn and having the records cut to playing into a microphone (with an accompanying amplifier) and having the record cut. Electric records will show more variation in sound.

You can listen to Doctor Lloyd and Howard Maxey by clicking on the video below. Note, that the song reflects the attitudes toward race at the time of its production (1925-1926).

The label below shows CBS’s “Note and Mic” icon. This icon was added to Okeh records produced after 1938 as Okeh was bought by CBS.

Notes: Mamie Smith first recorded on the Okeh label with the song, “You Can’t Keep a Good Man Down” in early 1920. This song would sell between 50,000-and 100,000 records. The record’s success proved that there was a market for African-American blues or “Race-Records”.

However, her breakout song, “Crazy Blues” was recorded in August 1920 and would go on to sell over 1 million albums within a year’s time.